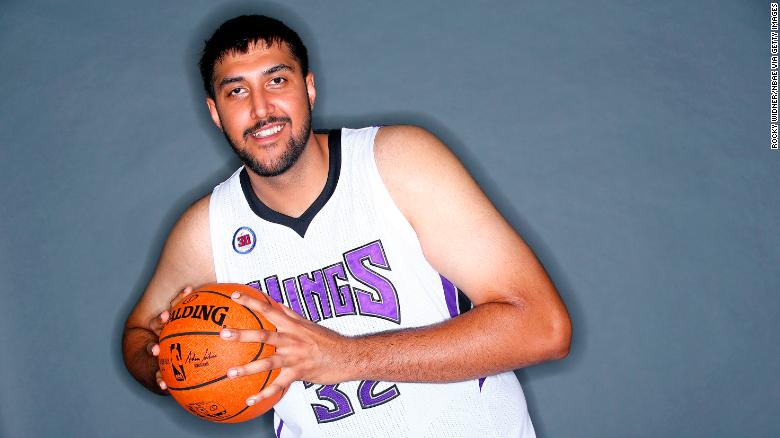 Sim Bhullar at the Sacramento Kings’ practice facility in California on September 26, 2014.

At 7 feet 5 inches (2.26 meters) tall, Gursimran “Sim” Bhullar is hard to miss. He stood out even more after becoming the first basketball player of Indian origin to step onto a court in an NBA game.

Called on for the final 16 seconds, it was a fleeting moment that he hadn’t been sure would ever arrive.

“I had to go on the court and do my job, so I wasn’t thinking anything of it,” the 26-year-old center tells CNN. He signed a 10-day contract with the Sacramento Kings who faced the Minnesota Timberwolves on April 5, 2015.

“It was surreal… It didn’t hit me until after the game that I played in the NBA game.”

Three days later, he became the first Indian player to score in an NBA game, against the Utah Jazz.

Bhullar had signed a 10-day contract with the NBA’s G League, an official minor league. Each season, NBA teams can sign players for 10-day contracts before either signing or releasing them.

While he hopes to return to the prestigious league, he says the NBA game has changed.

“They are playing more small ball and at a quicker pace, so for me to fit into that system is hard,” Bhullar says. “I have been working on my game, from getting into better shape and moving faster.”

Bhullar was born and raised in the Canadian city of Toronto, while his parents are from villages in the northern Indian state of Punjab. They moved to Canada in the 1980s where they married and had children. 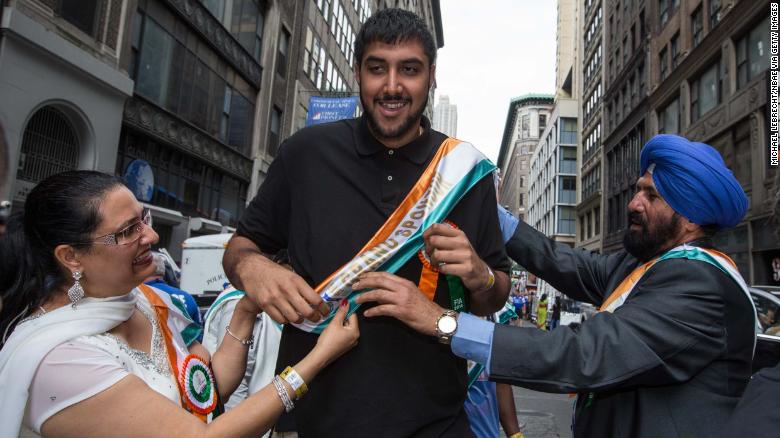 Sim Bhullar is flanked by his parents as he takes part as a marshal during the Indian Day Parade on August 17, 2014 in New York.

Soon after they arrived in Toronto, both his parents worked in factories while his father also drove a taxi. They now own a gas station where photos of Bhullar and his younger brother Tanveer, also a basketball player, adorn the walls.

Bhullar found it tough mastering English as a second language, having learned Punjabi at home, but embraced Indian culture and religion. He spent every weekend at the Gurdwara (Sikh place of worship). 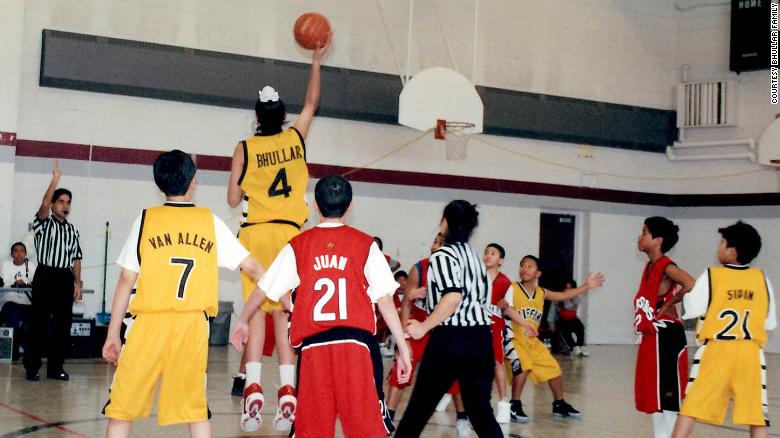 Sim Bhullar scores in a Philippine basketball league in Toronto, Canada, circa 2003-2004.
Bhullar got his first taste of the game when he was 10 or 11.

“I played basketball a lot more than anything else and I fell in love with it.”

A professional coach also loved his performance and offered him a place with the Ontario Basketball Association. After a successful college career, he scored a spot with the NBA draft in April 2014, before signing with the Kings, owned by Indian businessman Vivek Ranadive.

Reportedly the sixth tallest player in NBA history, a statistic he doesn’t monitor, he was used to being the tall kid at school. Even at age 15, he was about six feet, six inches tall.

Although his parents didn’t foresee basketball becoming more than a pastime, they always supported his career.

For Bhullar, it didn’t matter that there were no famous ethnic Indian players to act as role models.

“Vince Carter changed the landscape of basketball in Canada… I wanted to be like him and be on that stage one day.”

In fact, race wasn’t an issue. “Growing up, I couldn’t tell race, culture, religion or anything… When you step on the court, that’s all you see, the game of five by five.” 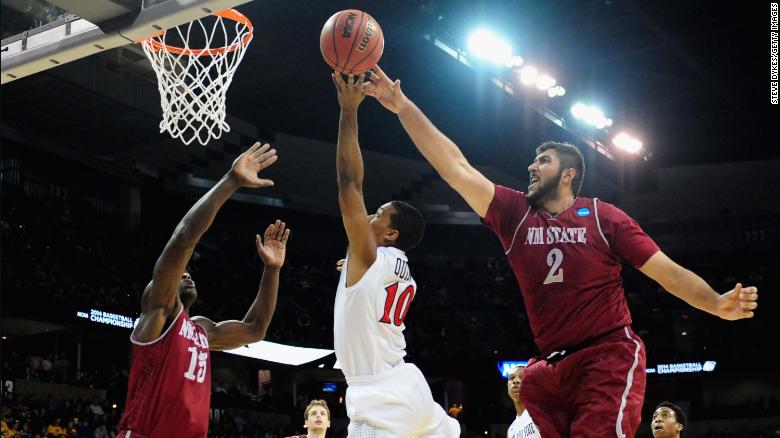 Sim Bhullar plays for the New Mexico State Aggies against the San Diego State Aztecs in the NCAA Men’s Basketball Tournament on March 20, 2014 in Spokane, Washington.

Bhullar is also unfazed by the expectations of Indian hopefuls.

“I know there are a lot of people looking up to me… but that makes me want to play harder, run faster and be a better player.”

He tries to travel to India whenever he can, last visiting around four years ago on an NBA-sponsored trip. He went to the city of Amritsar in Punjab and stopped by the Golden Temple, the holiest site of Sikhism. And he got mobbed.

“A huge police escort drove us up to the gate. I did one lap all the way around and there were maybe 200 to 300 people staring and taking pictures. I had to be ushered into one of the side rooms.”

It wasn’t just his height that drew attention; some of the followers knew who he was, calling out his name. And India has kept tabs on him.

“A couple of months leading up to the time I played in the NBA, my aunt in India would tell me that there was a segment of my news on television to see what I was doing, where I was playing, the highlights of the game. It’s pretty crazy.” 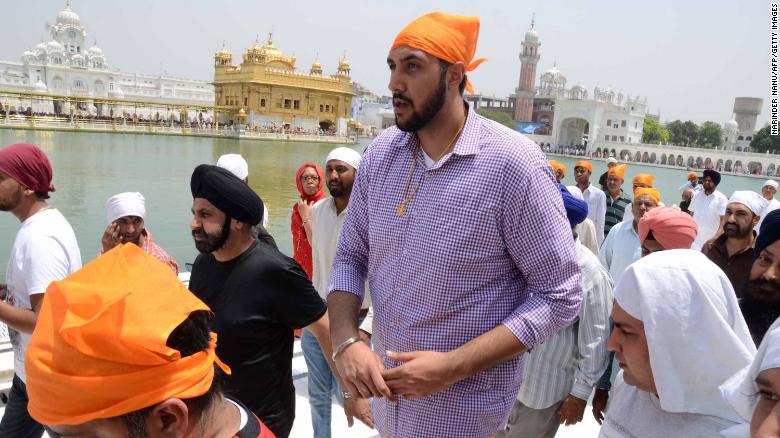 Sim Bhullar pays his respects at the The Golden Temple in Amritsar, India, on May 5, 2015.

Bhullar has also tried to popularize the game in India by opening courts and helping children to play. And he’s moved by the passion that already exists for the game.

“I would go to the courts in the morning and there would be a bunch of kids playing. I was in awe… I saw some kids with broken shoes… and they were running around and playing basketball.”

He thinks basketball could eventually take second or third place to cricket, the most popular sport in India.

Bhullar now plays for the Guangxi Rhino basketball team in China, splitting his time between Toronto and the southern city of Guangzhou.

“A lot of the places in China, they don’t see outsiders. Especially me being tall, I just stick out like a sore thumb.” But the team is like a “big family,” he says.

He maintains his Indian connections, speaking with his parents in his mother tongue of Punjabi and visiting Gurdwaras wherever he can find them.

Bhullar believes his achievements will pave the way for more Indian players.

“It’s a big stepping stone for Indians and Indian basketball. There are more than a billion Indians in the world and to be the first one to play in the best basketball league in the world is crazy.”

It’s hard for him to imagine how his life would have been had he grown up in India.