(CNN) Prince Harry and his wife Meghan began a new life in Canada last week, having stepped down as senior royals and left the UK. The couple’s departure has forced a heated debate on a problem that many say the country is failing to face up to: racism.

People from ethnic minority backgrounds make up 19.5% of the population of England and Wales. But some people who identify with this community say that when they call out their experiences of racism, they are shut down. By white British people.

“The white person in this debate always centers it on themselves,” author and broadcaster Afua Hirsch told CNN. “It would make more sense if somebody said: I haven’t got a lived experience of racism. I would like to understand your perspective.”
From as early as November 2016, Kensington Palace issued statements about the “abuse and harassment” that British media directed at Meghan, noting both the “racial undertones” and the “outright sexism and racism” she experienced as a result. When the Duke and Duchess of Sussex announced their shock decision to scale back their royal duties barely three years later, it was little wonder why.
But many of those who have dared to point out that racism is a factor in the Sussexes’ recent move have been publicly slammed for doing so. On the BBC political debate show Question Time, university lecturer Rachel Boyle, who identifies as black, said the UK press “have torn [Meghan] to pieces” because of racism.

I am appalled by the argument presented to me by this man! At no point did I call him racist, I said that his viewpoint is informed by his white privileged position- and he didn’t like it. https://twitter.com/Femi_Sorry/status/1217944914668990464 …

Laurence Fox: “I was born this way. To call me a white privileged male is racist”
WHAT THE SH*** #bbcqt 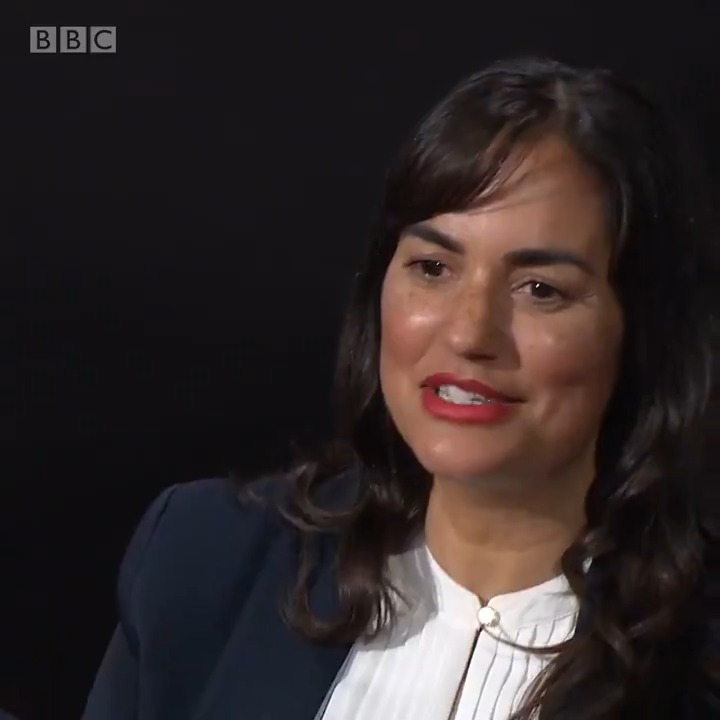 Her claims were deemed as “boring” by white panelist and actor Laurence Fox. He then said that Boyle was “being racist” after she described him as a “white privileged male.” The audience applauded Fox, and the pair’s altercation trended on Twitter.
Hirsch, a former barrister who is of African heritage, was abused online after writing an opinion piece for the New York Times on the racism directed towards Meghan. She was also berated on TV by Piers Morgan, host of the popular breakfast TV show Good Morning Britain.
“I am often requested to go into spaces where I’m the only person of color on TV debates and primetime shows,” Hirsch told CNN, describing the experience as “entertainment” for viewers.
“[They] expect me to single-handedly show them what is racist, prove that racism exists. That in itself is a manifestation of white privilege.”
Appearing on the This Morning TV show, lawyer and activist Shola Mos-Shogbamimu was asked to give examples of racism in the UK; she explained that it was “exhausting” having to keep proving that racism exists.
But Hirsch believes it is important to keep educating people.
“People think racism is when somebody has in their mind that they hate people of color. [They] will say, ‘I don’t have a racist bone in my body,’ while perpetrating racist narratives. This is an opportunity to show people what racism can look like.”
In December, successful British rapper Stormzy came under fire when, after an Italian newspaper asked him if the UK was still racist today, he replied “definitely, 100%.”
The musician added that racism in the country had worsened under the leadership of Prime Minister Boris Johnson, who has previously been criticized for making racist remarks. 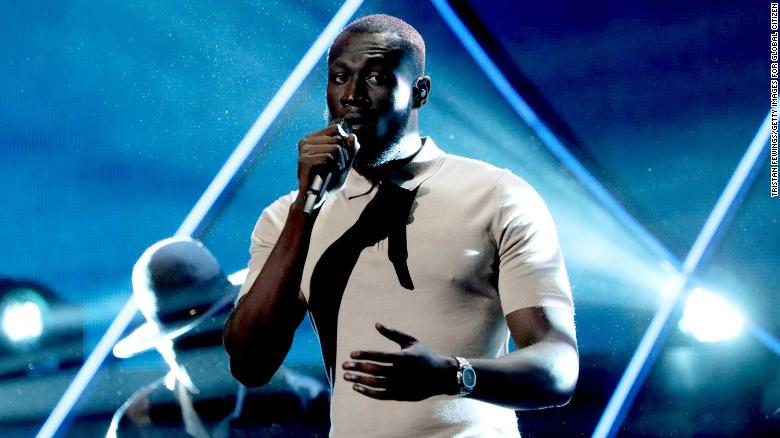 Rapper Stormzy came under fire when he said the UK was racist, “definitely 100%.”

Stormzy’s comments were misinterpreted by a number of media outlets who suggested he had said that the UK was 100% racist.
Broadcaster ITV News later issued an apology for its characterization of the story, but the incident has added to a simmering debate on race that was already in full force.

Have ITV seen the abuse #Stormzy has taken on Social Media as a direct result of ITV misrepresenting what Stormzy said? Have ITV seen endless Newspaper Headlines copying the misrepresentation of Stormzy by ITV?
ITV smearing #musician 2distract from Tory mess.@itvlondon#racism

While the musician got some support on Twitter, a derogatory hashtag soon took over.

And here it is.

Stormzy is getting flack because he is WRONG. Period. There is a leftist agenda to try to stop criticism of anyone if they have some kind of minority identity. The UK public are sick to the back teeth with this rot. #StormzyIsAMassiveBellend https://twitter.com/veryangryhobbit/status/1209048236494917633 …

Yes, because a black man totally deserves abuse because he pointed out the UK has an issue with racism, that doesn’t totally prove his point.

In contrast, white English football coach and former player Gary Neville was showered with praise when he called out the problem with racism in football, around the same time as Stormzy expressed his views.

Two people speak out about racism in the same day.
One is black, one is white.
The reactions could not be more different.
Gary Neville praised to the hilt.
Stormzy gets abused.

Racism exists in every country. This is a non story with a nonsense observation by @stormzy . Britain has always been a tolerant country and Britons are no more, and probably a helluva lot less, #racist than other people. #StormzyIsAMassiveBellend #StormzyIsAHomophobeDay

Some experts make the point that support from people in influential positions can encourage others to listen and to pay attention to an issue.
“What we really need is allyship,” Frank Starling, global VP of WERKIN, a London-based tech company that advises organizations on inclusivity, told CNN. “People that understand that they may have a privilege or a voice over others and they’re willing to share that platform … It’s definitely not just the responsibility of the victims … to solve these challenges.”

Do we need to call it out and stand with those who do?

Harassment and victimization are a daily occurrence for many people from black, Asian and other minority ethnic backgrounds — and not just from ordinary people on the street.
In 1999, an inquiry into the murder of black teenager Stephen Lawrence, and the botched investigation that followed, found that there was “institutional racism” in the
police.
Two decades on, black people in England and Wales are still 40 times more likely than white people to be stopped and searched under so-called “section 60” checks that allow police to search a person without suspicion, according to a 2019 report by civil rights charity Liberty.
Growing up in the 1980s, Starling said he would wear smart shirts instead of casual clothing at the weekend, after he was stopped by the police multiple times.
Even today, he says he is careful about what he wears on a wintry morning. “Because I’ve grown up in a society where the idea of wearing a hoodie as a black man may make people feel fear, I’m concerned about that,” he told CNN.

‘Racism is not a matter of opinion’

The UK is often praised as a melting pot of cultures. But research shows that multiculturalism is now under attack.
Omar Khan, director of the race equality think tank Runnymede Trust, points to a report that found 71% of people from ethnic minorities who were surveyed in early 2019 reported having experienced racial discrimination, compared with 58% before Britain’s 2016 vote to leave the European Union.
Online racism has more than doubled to 51% since two years before the Brexit vote, according to the survey by Opinium. The same survey found that the number of people from ethnic minority groups reporting rants and negative comments about immigration or racist comments made to sound like jokes rose by about 50%.
Even the United Nations has said more needs to be done about racism in the UK, including Brexit-era hate crimes.
“I got more racism last year than in the previous 25 years, all of it online on Twitter,” Sunder Katwala, director of think tank British Future, told CNN. “We should protect free speech, but not racist abuse.”
Social media squabbles also distract from the real problem.
“The racist stereotypes about different ethnic groups are always predictable,” Omar Khan said, explaining that the roots of racism in the UK can be traced back to the days of the British Empire.
“They are part of our wider intellectual and cultural heritage,” he said. “Frankly, it’s embarrassing we still don’t recognize this, and instead prefer social media or personality spats instead of actually tackling racism and its consequences.”
Starling said that an overall lack of diverse representation in influential positions is a major reason why certain perspectives are less accepted.
Recent research reveals that members of ethnic minority groups only make up 6% of top management positions in the UK and the UK journalism industry is 94% white and 55% male.
While diversity in parliament has improved in recent years, in September 2019, just over 8% of members of the House of Commons were from non-white ethnic backgrounds.
Representation is not always welcome, though. Amnesty International’s analysis of tweets mentioning female MPs in the lead-up to the 2017 general election found that almost a third of abusive tweets reviewed were targeting one woman: Diane Abbott, the black high-profile shadow home secretary.
British society is known for its traditional “stiff upper lip” and “reserved” attitude, but Starling says it must tackle this issue, regardless of how uncomfortable it might be to do so.
“Being called racist indicates that we might be a bad person,” he says. “We might hold a bias and that’s really scary and very uncomfortable.”
But uncovering unconscious bias, innate stereotypes about certain groups of people that we are unaware of, is in dire need of discussion, he says.
Someone’s lived experience of racism, though, should not be open to debate. “Racism is not a matter of opinion,” says Khan, “but of evidence and reality.”
In fact, like Meghan and Harry, Hirsch says some people subjected to racial discrimination are considering leaving the country too. “I’m not saying people should leave… [But] I don’t feel this is a healthy place to be right now.”