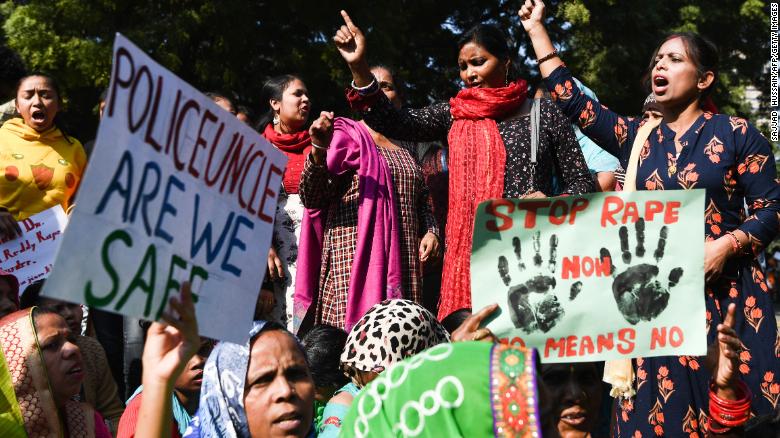 Social activists and supporters protest against the rape and murder of a 27-year-old veterinary doctor in Hyderabad, during a demonstration in New Delhi.

A typical scene unfolds in India: angry crowds flood the streets in a mass outcry after yet another woman or girl falls victim to sexual violence.

Protests have become a cornerstone of India’s response to such attacks, often demanding stricter laws or even the death penalty for rapists. Some protesters also pledged kinship with the latest victim, holding up banners that described her as the nation’s “daughter.”
But cultural values held behind the closed doors of family homes are a part of the problem that is being protested against: privilege for boys and submissiveness for girls.
“Girls are trained not to exist,” says Deepa Narayan, an author and independent adviser on international poverty, gender and development. “You (girls) don’t need any power. And if you want power there’s something wrong with you and you’re being bad.”

India’s preference for boys is prevalent even before birth. Sex-selective abortion in the country has distorted the natural sex ratio, in favor of males, according to the World Health Organization.
Some experts say the practice is becoming less common but for girls, it can lead to poorer allocation of household resources and medical care, neglect, and even infanticide.
“In some families, during a girl’s birth, the welcome is more muted. But a boy’s birth is welcomed to a drum; buying expensive sweets and telling everyone that a boy is born, a boy is born,” says Narayan, who has more than 25 years of experience working at the World Bank, the United Nations and NGOs.
But this is not a result of “evil” parenting, she tells CNN. “This is all done under the rubric of love. It’s not conscious. In India, they call it adjusting (to the culture).”
However, this type of conditioning can have detrimental effects. “Boys are not taught dialogue. Their needs are just met, they’re never told ‘no.’ They’re told not to cry. Where does all that anger and rage go? Women go into depression and men lash out.”
Narayan argues that the mental health of Indian women “is a totally neglected area.”
In fact, 36.6% of global suicide deaths among women occur in India. Furthermore, Indian women who took their lives were more likely to be married, to be from more developed states, and aged below 35.
But a male dominated society is bad for men too. “Patriarchy lifts them, pretends that they are kings. But no human being can lift up to such high expectations,” says Narayan.
“That’s why it’s so difficult for men to apologize because they are expected to be always right, godlike figures and providers.
“Nobody is happy, but we’re not breaking this apart. Things would change much faster if we actively engaged men in conversation.”

‘Rapists put their mothers on pedestals’

A woman who interviewed 61 convicted rapists detained in India’s largest prison agrees.
Dr Madhumita Pandey, originally from India and now a Criminology lecturer at Sheffield Hallam University in the UK, was only 22 years old when she carried out her doctoral research at Tihar Jail in Delhi. The men convicted of the infamous 2012 gang rape are held in the same complex.
These conversations are “missing” from discussions on sexual violence against women, Pandey tells CNN.
“A lot of them actually found the conversation (with me) very cathartic,” she says. “How can you reflect on your actions if you’re not even going to speak about it?”
The attackers, interviewed between 2013 and 2017, seemed like any other men, Pandey says. They also shared views that reflected Indian society’s perception of the gender division of labor, with women “in charge of raising the family and taking care of household chores” and men as “outdoor agents.”
This especially came to light in their relationships with their mothers and sisters.
“Of all the men that I spoke to, there were only a handful that didn’t share a good relationship with their mothers. Everyone else put the mother on this pedestal.”
Pandey says this is due to the absence of fathers for some of the men while they were growing up, and the idea that they were the preferred child.

Many of the culprits had older sisters. However, the men felt they were the favorite child because their mothers were elated to have finally conceived a boy, leading to unearned privileges such as being fed first. “Mothers were playing a very crucial role in setting gender role standards,” says Pandey.
The rapists didn’t express remorse and described themselves as “inmates” instead of offenders, often blaming their victims, Pandey says. She puts this down to a lack of understanding of their actions. Pandey advocates for restorative justice, delivered to convicted attackers during their lengthy jail terms, so they may emerge as reformed individuals.
Although the men she interviewed were generally uneducated and from low socio-economic backgrounds, she stresses that this status does not correlate with violent behavior against women and that people from privileged backgrounds may have the wealth and means to evade justice.
Pandey argues that prevention can happen in schools. “We need educational institutions to introduce some form of comprehensive sexuality education. It’s crucial that there’s more awareness regarding sexual violence. We need to be telling people about active consent, about toxic masculinity and the younger we get to people, the better it is.”

‘And then another rape happens’

Zero-tolerance towards everyday misogynism is also key, Pandey says. “There’s so much outrage when there is a rape case. Where is the outrage when day-to-day experiences of women are also highlighting abuse in some shape or form?” These behaviors, she says, lead to more extreme crimes.
The crimes also happen in the home. Shockingly, 93.1% of rape offenders were neighbors, relatives or prospective marital partners of the victim, according to National Crime Records Bureau data from 2017. And marital rape is not criminalized in the country.
Research into domestic violence in 2016 revealed that 31% of married women have experienced physical, sexual, or emotional violence by their spouses. To make matters worse, almost 45% of Indian women believe that a husband is justified in beating his wife, according to World Bank data.
But mass outrage is expressed in India for attacks outside of the home, not within it.
“People don’t make the link between someone else’s terrible, extreme behavior and their own everyday behavior in the home, the offices and the streets. I think that’s the missing link,” says Narayan.
The death penalty that is often demanded in rallies also doesn’t kill the problem.
“The men will get hanged, people will feel that the government has done their duty, and you’re going to go back to sleep. And then another rape happens,” says Pandey.

‘Crack the shame around rape’

Collective outrage can spur change, Narayan says.
“Protests are an opportunity to start talking about sexual violence. Before the (2012 Delhi gang rape), even the word rape, you couldn’t really use it. It’s beginning to crack the shame around rape,” she says.
“It’s really a people’s movement … getting out to the streets without guns, without anything, embarking in protest, is a very courageous act.”
The demands are getting through to some leaders. Most recently, Delhi chief minister Arvind Kejriwal announced that his government would make schoolboys sign pledges to not commit crimes against girls or women.
Mothers and sisters are also encouraged to engage in discussions with boys and warn them against wrongdoing. Narayan highlights this as an important step.
The need to engage boys is being implemented by some organizations in the country, such as the Equal Community Foundation, based in the western city of Pune. “Women’s empowerment initiatives will continue to yield lower results due to the backlash that they face from the men and boys in their families who continue to be socialized into patriarchal norms,” ECF’s executive director Christina Furtado tells CNN.
The NGO overcame the reluctance to fund male-focused initiatives by relaying the long-term benefits of working with boys.
In the meantime, however, India still ranks 125 out of 162 countries on the UN’s Gender Inequality Index.
If India can build 110 million toilets to clean up the country and raise its global business ranking, then “why can’t India move 100 ranks in two years from being the most dangerous country in the world (for women) to a safe country in the world for women?” asks Narayan. “I think we can change.”
People flooding the streets to express a chorus of disapproval for abuse against women is a powerful display that can be difficult to ignore. But once the streets clear and everyone retreats behind closed doors, the message must be firmly driven home.